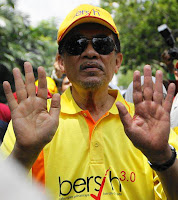 As you are aware that this new Malaysian political phenomenon of street demonstrations is a recent creation since 1998. The organisation of mobs to demonstrate in the streets to demand for the Government to bend down to address certain issues which are apparently unfair or unjust but not quite proven.

This may be the only country in the world where heavily subsidized citizens with full stomachs of probably KFC or MacDonalds, take to the streets to demand for more. And where is all this is going to end.

Even an august body like the Bar Council is in play.

For some it is fashionable to challenge the authorities by donning something yellow. We have seen it all before on the TV screens but were these Thai demonstrators heavily subsidized by the Government with scholarships so on and so forth ? Their motive was entirely different from the maddening crowd which held sway in Bersih-bersih.

By confronting the ultimate authority of the Government which is the Police, I can only assume that the hatred so engendered in the young hearts and minds, burst forth in a torrent of thoughtless actions without care for life and limb. This is mystifying in Malaysian democratic terms.

How does one become so hateful in a peaceful, stable and prosperous land like Malaysia ?

How come droplets of the venom have been inculcated in the minds of the young that all will be well practically overnight by the physical demonstration of a massed mob which could turn either way in the helter-skelter of fear and confusion.

And the leaders who organised all these phenomena, how culpable are they if the young, the old and the infirm are killed or injured or anybody for that matter ?

There must be searching questions to be answered in a holistic civil society.

As far as I know, friends of mine in PJ were accosted with pamphlets to march for Bersih 3. They were grandmothers. They told me they had not a clue what it was all about. That was the truth ! Not a clue !

This is a time of reflection and dedication to the wherewithal of our existence in this happy land in which our forfathers came and we were born.

For what purpose may I ask ? To put them into power in Putrajaya ? We Malaysian Chinese might as well march for ourselves if needs be. Why march for others who are as yet unproven ? Don’t be silly and foolish !

All the Chinamen around the world would definitely laugh at us Malaysian Chinese as a bunch of morons marching to put others into absolute power, at the risk of life and limb ! We Malaysian Chinese would be the laughing-stock of the International Chinese World that we are stupid to do so.

The Hong Kong Chinese only began to march after the British left. But before this, they were definitely ‘no class’. Some of them even called themselves ‘Ramsbotham

The Malaysian Chinese should not be used by others with ulterior motives. Search your minds and hearts and try to fathom the fact that we are as unique as our beloved Malaysia in every way. Look at those who are riding the high horses who are not in power and their motives. They are all doing very well, thank you very much ! Most of them are multi-millionaires if not millionaires. Thanks to those they now hate !

Search your hearts and minds again and again to avoid being stupid.

I asked a friend once, ‘ Have you ever met a stupid Chinaman ?’ He replied, ‘ No.’ I continued ‘ But you have met some of them who are so clever as to be stupid’. And I reeled off a few household names. He laughed loudly !

So Malaysian Chinese, your own future is in your hands. Vote for the strongest incumbent political party in the land. The one that has a record which served you well through successive governments.

We, Malaysian Chinese, should find it impossible to support any candidate who riots in the streets to be the Prime Minister in this holistic civil society.

We, Malaysian Chinese, should also remember what our parents and our grand-parents taught us when we were young – respect the aged, have filial piety and work-hard. Surely, we have not forgotten !
at May 12, 2012

Salam WZWH,
I have always said that the chinese are smart voters as compared to Malay voters.They are decisive come voting as can be seen in the last two elections of 2004 and 2008.To them their business is of paramount importance. They seek fairness and are generally supportive in general to the government of the day since the many elections.However, the 2008 election has seen a drastic shift in the community voting pattern.These are due to MCA and Gerakan weaknesses seen as not representing the chinese interest and they turn their back on these two parties.UMNO, however, has been consistent in despite the political landscape change never sren before.

Where and what will be the direction for PRU 13 then.? Kampong man predicted base on current performance by both BN and the PR the following:
1) BN and Najib shall remain relevent and will retain Putrajaya without much problem resulting from the serious various transformations made meeting.,if not most ,the Rakyat demands.
.
2) Improvement in overall BN component parties performance but the 2/3 majority may be achievable with difficulty depending on the fence sitters swing prior election.

3) If BN supporters are loyal to the WINNABLE CANDIDATE with no qualm Selangor will be back won by BN due to PR unfullfilled promises in Selangor.

4) Election is expected to be in Sept after the Bersih issues are resolved unless my kampong bomoh says othetwise.

5). The PR coalition parties will continue to be at logger head due different values and ideologies especislly the DAP and PAS.These will not help PR .

5) Any DAP malay candidates will lose in Malay dominated constituencies.So to my good buddies Sakmongkol and Aspan Pahang and N9 will continue to be under BN bro.But i wish you luck bro.

To WZWH and QD let me buy you coffee and ubi kayu at CAWAN anytime.Najib beat us for being there yesterday first.Najib dedervr the mandate and i am pretty sure he will be fairly rewarded.Insyaallah.Wallahwualam.

@Kampong man- have no political and business agendas.As many have rightly said "It is only my opinion" .Have fun and a good Mothers day .

I have always admire your political views, personal opinion and belief. It was indeed a good write up and hope the public notice of your fair personal comment on WZWH constructive criticism.