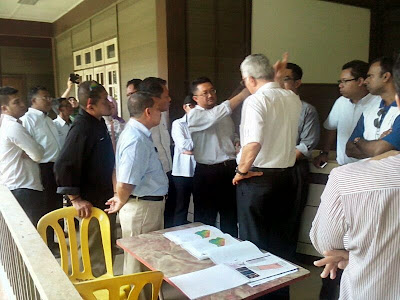 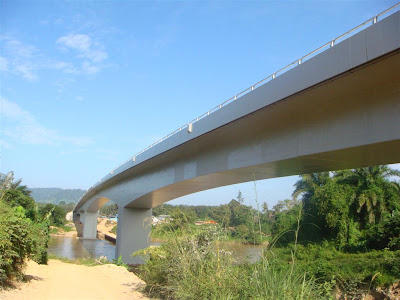 1 In May 1960 I was invited to join the retinue of the Sultan of Pahang, making one of his routine annual tours of inspection that carried him to virtually every habitable corner of his vast and sprawling domain. His state was the largest of the nine which, together with the smaller colonial settlements of Penang and Malacca, made up the Federation of Malaya that had gained its independence three years earlier.

2 We were a large contingent, occupying several of the large prahus or long boats that would make up the entorage. VIP guests included the Pakistan High Commissioner and his wife, seen here descending the steps to board the boats.

3 Sultan Abu Bakar Riayatuddin Al-Muadzam Shah ibni Almarhum Sultan Abdullah Al-Mutassim Billah Shah GCMG was born on May 29, 1904 and would die on May 7, 1974. The fourth sultan of modern Pahang, he had been decorated by the former British colonial government as a Knight Grand Cross of the Order of St.Michael and St.George and was now the longest serving of all the Malay sultans, having remained on the throne since 1932. When I met him in 1960 he was 56 years old. With him was Habibah, most senior of his four wives.

4 Always the first to board, he cut a tall and striking figure, beloved by his subjects as a friendly and approachable ruler who took a genuine interest in their welfare. However, due to his penchant for marrying commoners, including several popular actresses and singers, he was less popular with other Malay rulers who declined, five times, to choose him as Malaya's next supreme monarch, the Yang di-Pertuan Agong.

5 During the Japanese occupation of Malaya, he had discreetly encouraged resistance movements such as the Askar Wataniah, the British-aided Force 136 and the Malayan Peoples' Anti-Japanese Army. Just before this particular expedition, he had been appointed Honorary Colonel of the Royal Malay Regiment. Certainly he was a man of palpable military presence and bearing, but beyond that he was also every inch a monarch.

6 Although he spoke excellent English, it behove me to address him in Malay, which was tricky since I wasn't well up on the more formal style of address. Flying his state flag, and bearing Sultan Abu Bakar, with his consort Habibah by his side, the lead vessel set off up the Pahang River from Kuala Lipis, which is located at the confluence of the Lipis and Jelai rivers

7 Venerable old Malay villagers gathered on the river bank to observe our departure. Our entourage comprised palace officials and retainers, civil servants and minor functionaries. Other than the High Commissioner for Pakistan, I was the only expatriate in the party.

8 Were it not for our powerful, petrol-fuelled Evinrude outboard motors, we constituted a scene of mediaeval pageantry, periodically reinforced, when we stepped ashore, by the spectacle of local dignitaries in remote riverine kampongs prostrating themselves before this casually-attired but supremely majestic Sultan, some lifting his shoe and placing it on their heads in token of submission. Yet it was evident to me this was not what he expected; merely something he endured because it pleased them to be allowed this demonstration of their fealty.

9 During his lifetime the sultan acquired eight wives, always careful to ensure that no more than the permitted Muslim quota of four should share his palace at any one time, and always making ample provision for those retired from the current list to make way for new arrivals. Such retirees were given their own homes, pensions and retainers. On the particular cavalcade he was escorted by the most senior of these consorts, whom everyone knew would shortly be retired herself to make way for his latest inamorata.

10 Habibah was on the way out, to make way for a successor who was already a queen in her own right, though only of the silver screen rather than the sultan’s court. Born Libeth Dotulong, she had adopted the name Maria Menado after her birthplace in North Sulawesi, Indonesia.

11 Maria was three years older than me, her striking looks marked by a slightly wild, exotic quality that had nearly condemned her to be typecast as the result of her earliest screen appearances. In her first four films, based on screenplays supplied by her first husband, Abdul Razak, she had played Pontianak, the female vampire of Malay folklore.

12 I could see, from the sultry eyes she had already cast in my direction, that Maria’s presence in the entourage was going to place me – if I wasn’t careful – in a perilous state of lese majesty.

13 At every kampong we visited, the schedule of activities followed a set programme, which included inspection of the local school or medical clinic, followed by a conference with the local penghulu (headman), imam (mosque official) and other dignitaries.

14 Sultan Abu Bakar always took a lively interest in local affairs, asking many questions. Just about all the livestock was slaughtered to provide for the kenduri or makan besar (village feast) which would be followed later in the evening by a celebratory dance staged in a specially-constructed dance hall decorated with palm fronds and coloured bunting.

15 One night, quartered in the hut of the village headman at Kampong Buntal, I was stung by a centipede The nocturnal predacious arthropod responsible for inflicting this injury had clearly dropped on me from the atap roof thatch, which happened to be swarming with the creatures. I awoke in the early hours of the morning with an intense pain on the back of my right hand. By the time the sun was up my entire right arm was swollen to twice its normal girth, and the lymph gland under my armpit was inflated like a balloon.

16 Higher up the Pahang River, the waters ran shallower and the rapids grew more plentiful. We were headed for the former King George V National Park, which had just been renamed Taman Negara.

17 Arrived at at Kuala Tahan, we were accommodated in freshly erected timber dwellings of Taman Negara's putative visitors’ reception area, so new and raw that windows were missing and floors were covered with sawdust. We made little excursions to the “observation hide” situated alongside the nearest salt lick and saw absolutely nothing other than a few birds and butterflies.

18 On the return journey my boat ran into difficulties when the propellor of the Evinrude outboard struck a rock just under the surface. This called for some rudimentary running repairs.

19 With our journey just a day away from its conclusion, His Royal Highness gave permission for a fish drive, using the toxic root of tuba plants. Because the extract of this root, released into rivers, could stun all fish life for several miles downstream, its use was specifically forbidden – except when waived by a sultan’s decree.

20 The villagers were ecstatic. A fish drive such as this had become a rare occasion; its legend handed down from generation to generation. I spent the eve of the event observing the preparations as great clusters of tuba root were beaten to drain their milky white juices into jars and other containers. Immense care was taken not to spill any into the river because that could trigger premature piscine paralysis and ruin the whole exercise.

21 With the water running well under its average seasonal level, even relatively low concentrations of the pulverised root would produce spectacular results, so the following morning took on the character of a regatta. Our boats were lined up like vessels competing in a boat race, awaiting the signal to start, which came when the pots of tuba solution were released into the water.

22 We were off, riding the current without any form of propulsion, oars and rudders used merely to stabilise our course along reasonably straight lines as we kept parallel to other vessels on either side. Some hundred yards or so ahead of us, where the deadly tuba toxin was taking effect, the river began to writhe and then boil as fish of all sizes either rose threshing to the surface or passively floated belly up, too stunned to move.

23 It was the Malayan equivalent of shooting fish in a barrel, but much more fun, because there were a great many fish and, in place of the barrel, the entire width of the river, progressing at a fast clip downstream.

24 With nets, scoops and baling cans we hauled our catches aboard, until arms were weary and scuppers too laden to take on more. I wondered if the fish stock would ever survive to replenish itself after so massive a slaughter. And the mayhem went on, bend after bend, mile after mile, with the inhabitants of numerous other villagers clustered on the banks, waiting to rush down and board their own vessels for a share in the carnage.

25 These additions to the chase crowded our flotilla to the extent that we were increasingly in danger of collision. Oars were used to fend off rival vessels and one or two boatmen lost their footing and ended up in the water, grinning broadly and diving deeper, often to come up with a sizeable catch in each hand.

26 As our boat slipped alongside the royal barge, the Sultan caught my eye. He knew I would be writing about this expedition, and would possibly be critical about the environmental impact of this exercise of royal prerogative. But I sensed in his gaze an unspoken plea for understanding. He was merely the product of his lineage, the vessel of a semi-divine right of kings. This ritual pilgrimage, the whole paraphernalia of our progress – and in particular this culmination he must share with his subjects – were incumbent upon him, part of the burden he was born to bear. The years might eventually remove that obligation, and render this scene obsolete, but not in his lifetime

Henry Ridley, while Director of Singapore Botanic Gardens, travelled extensively throughout the Malay Peninsula, recording the flora and collecting specimens, which he sent back to Kew in large numbers in 1911. 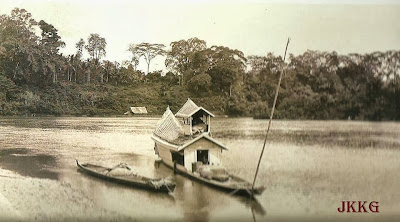