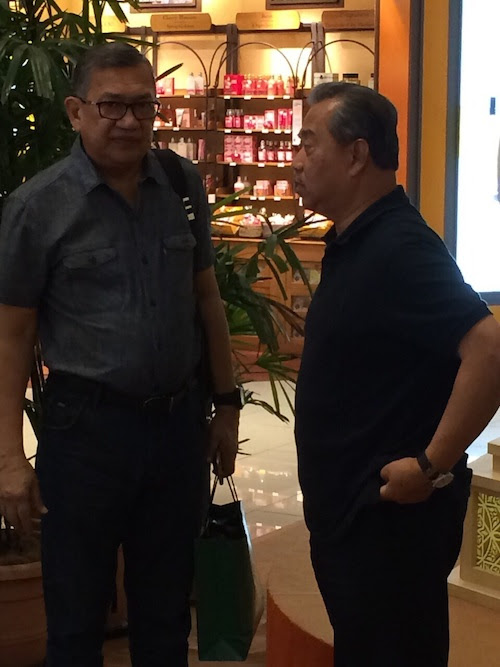 Malaysian politics is really getting so interesting and is reminiscent of Indonesia’s day of the six generals of 1st October 1965. That was the day when six generals were assassinated in a coup d’état that trigger a civil war and saw the deaths of 500,000 Indonesians.
If the anti-Prime Minister forces succeed in bringing down Najib Tun Razak, this is going to be the first coup d’état in Malaysian history, 50 years after the one in Indonesia. And history will probably remember this as the day of the six Tan Sris — the four in that press statement above and another two who I am sure you know who they are.
And what is beautiful about this coup d’état is that it did not require the use of the army, like in Indonesia, but merely the use of the media to meet its objective. (Well, to be fair, there was no Internet back then in 1965 or else they would have probably used this medium as well).
Say what you like, this is all a perception war and the use of the media to fight the war. But when back in 2007 we said that the government or the ruling party are novices at this game, and that we in the opposition have been playing this game, and successfully too, for almost ten years since 1998, the ‘experts’ and ‘mahagurus’, such as the Minister of Erection-once-every-five-years, scoffed at us and belittled us.
Well, the 2008 general election result proved what we said and it was now our turn to scoff at and belittle the government. Three months later, Barisan Nasional held a meeting to contemplate the post mortem done on the 2008 general election and had to sheepishly admit that we were right and they were wrong.
As what one DAP leader said, as far as they are concerned, Najib and the government (meaning Umno and Barisan Nasional) have to be presumed guilty unless and until they are proven innocent. And this DAP leader said they are not interested in a trial in a court of law but instead a trial by court of public opinion. And they are going to use public opinion to pronounce Najib and the government guilty and hang them upside down by their you know what.
So that is what this game is all about. It is the game of perception and trial by media in a court of public opinion. Are those small boys still wet behind the ears in Najib’s office too dumb to understand this? So what hell are they doing about it? Idiots!
The anti-Najib forces do not want to wait for the taskforce or PAC to complete their investigations. What if the taskforce or PAC comes out with a verdict that says Najib is innocent of all allegations and that they have not found any evidence to prove that the Prime Minister is guilty of embezzlement or stealing? After all, this is the allegation and if no theft is proven then the whole case against Najib falls to pieces.
So before any conclusive evidence is revealed, that may or may not clear Najib, they want to ‘play safe’ and oust him now. In that way, in case the whole thing does not work out the way they hope, and Najib is not implicated in theft, then Najib would be out anyway so it no longer matters.
Even while the taskforce, which Bank Negara is a member of, announces that the investigation is proceeding (see above), someone from Bank Negara leaks even more documents to the Wall Street Journal. The question is are these documents fake or doctored or are they authentic? And if they are authentic then who from Bank Negara or from the taskforce leaked these documents?
Why can’t they wait for the investigation to be completed since not one but two groups are conducting an investigation — the taskforce and the PAC? Are they worried that the taskforce and PAC may not come out with a guilty verdict and that is why they are making a pre-emptive strike?
My sources say that whether RM2.6 billion was or was not transferred out from 1MDB as alleged, there is no evidence that Najib was actually the beneficiary of the money. In that case the allegation that Najib embezzled or stole the money would be demolished.
If Najib was not the beneficially of that money then who was?
Yes, that is the RM2.6 billion-question and that is precisely what they do not want Malaysians to know. So they need this coup d’état so that Najib can be forced out of office. Then the issue ends there and no further action is required. However, if they fail in their coup d’état and Najib stays in office, and if the investigation proves that Najib did not steal RM2.6 billion, then the investigation cannot stop there and has to go deeper into who, then, were the beneficiaries.
The danger with this, of course, is that some of those beneficiaries could actually be those making the allegations against Najib or maybe even the children of these people.
Now, would that not be most embarrassing when you make an allegation against someone and then it is finally discovered that you and/or your children were actually the beneficiaries? Yes, in that case I, too, would want Najib buried before the truth is known.

Suspension of accounts and Najib's position

Was out since noon and wow, so many private messages via FB asking about my opinion on the joint task-force suspension of six accounts and also what will happen to PM Najib. 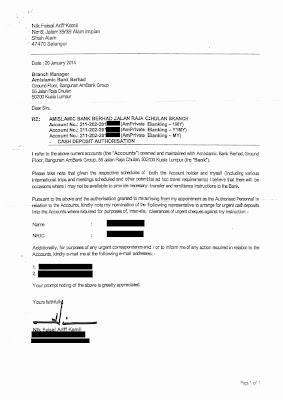 One of the 9 pages released by WSJ today - why are critical names blanked out?

Okay, I have been keeping abreast but now I have had the time to further understand the documents and today's development.

These are my comments:

1) Are you sure those WSJ documents are verified authentic by the relevant authorities? No one has issued any statements to confirm the documents are genuine and validated yet.

They are after all, still paper documents given by unidentified sources.

2) The WSJ documents suggest that all three accounts allegedly under PM Najib's name were not in control by PM but by Nik Faisal via a power of attorney.

Why would PM allow other people to control his accounts allegedly worth billions? hmmm...

3) Under UMNO party arrangements, the President is allowed to hold party funds in trust under his own name - a practice apparently dating back to Tun M's time.

It was believed previously that UMNO is rich and owned, via proxy, many companies such as Fleet Group, Renong, UEM, Media Prima,Peremba group, Utusan, KUB etc

Where has all this money gone to now?

Many other 100% MOF-owned companies such as Khaznah, Petronas, 1MDB also do CSR.

The amount of CSR done by SRC seems to be exactly 1% (RM40m) of their RM4 billion funds - a reasonable amount.

5) The source of the USD700m (RM2.6b) still remains unknown and undisclosed by the WSJ documents.

Sarawak Report and WSJ had suggested that these funds came from the 1MDB-GIL USD3b bonds raised in May 2013. However, so far the PAC or the two independent international auditors have found no evidence or cast doubt that this GIL funds are missing.

Even PKR's Datuk Kamarul Baharin Abbas who sits on the PAC finds the WSJ story unbelievable and said “The PAC has not received any report on the 1MDB money trail involving such large sum."

The main purpose of these GIL funds were supposed to go into a ADMIC JV with Aabar. These funds were also earmarked to be included in the USD4.5b asset-swap between Abu Dhabi Govt's IPIC and 1MDB that will see 1MDB's debt reduced by RM16b.

IPIC had already announced this to the London Stock Exchange a couple of weeks back.

6) The USAGE and subsequent whereabouts of these alleged RM2.6bil funds remains unknown.

Where these spent on foundations, Yayasan, CSR and election activities or were any remaining amounts (and how much) subsequently transferred back to other UMNO accounts?

But one thing is clear, these accounts were also controlled under power of attorney by other people too - not solely by PM Najib.

Of course, many people still think it is absolutely illogical that if he wanted to songlap, he would bring money already safe in an offshore account overseas back into Malaysia under his own name.

7) Suspension of accounts is normal in any investigations. If you don't suspend then how to investigate?

Mere suspension does not mean guilt at all.

In fact, it is now clear that under PM Najib, all allegations are fairly and openly investigated instead of being swept under the carpet like the past PM of 22 years where he was never investigated even though numerous allegations were thrown at him.

8) Are you sure any of the six accounts suspended today belongs to Najib? There have been no official confirmation on this although Mkini reported this.

However, I heard otherwise.

PM Najib's position
As for whether PM Najib can remain in power although he has yet to be found guilty of anything?

Don't write him off so easily yet. It's far from a foregone conclusion.

With GE14 many years away and the UMNO party elections postponed to after GE14, the only three ways that can remove Najib as PM now are:

1) Two-thirds of UMNO's Supreme Council calling for an EGM to remove the President.

This is unlikely because more than 2/3 are still strongly with PM Najib and continues to support him as party president and PM.

In fact, many UMNO members are now angry at Tun M for disturbing and trying to expose BN's funding machinery and also, in their opinion,, hurting UMNO-BN's interest by (allegedly) collaborating with internal enemies (such as ANAK Felda / PAS) and external enemies such as WSJ, NYT and Srawak Report.

2) Vote of no confidence in Parliament or impeachment.

Unlikely coz PM will probably threaten to dissolve parliament straightaway which would scare the BN MPs. Thus the 134 BN MPs would vote "No" in parliament for this motions as they want to continue remaining in power amidst fears they will lose in elections right now.

Since calling for snap elections is what DAP wants right now, BN MPs will further resist this move and not give DAP what they want.

3) DPM consulting YDP Agong together with Attorney-General to recommend suspending or sacking Najib.

This would be the most likely scenario PROVIDED, AG determines there is a case to charge Najibl AND

DPM wanting to make this move and he believes he has enough support from the UMNO Supreme Council to do so.

If he does not have such support, the Supreme Council will probably "kill off" Muhyiddin and put in place the more popular Zahid Hamidi.
Mere allegations of scandals have never removed a sitting PM in Malaysia before.

The 'fail safes' put into place in the system by Tun M in his 22 years are too effective.

Thank you so much, Tun. You Da Man! Thank you so much for the fail-safes, Tun.

If the various investigations into 1MDB and these alleged money-flows clears Najib and he goes after his enemies via clampdowns or law-suit, Najib may emerge stronger than ever.

Three years is a long time to GE14.

Remember during the 1987, team A vs team B split in UMNO and with elections just two years later, many people thought BN would lose?

But the final results were not even close! BN ended up wining 133 vs 89 seats.

And Pakatan being dead or weak or pengsan along with UMNO's improving ties with PAS will only serve to strengthen UMNO and BN. 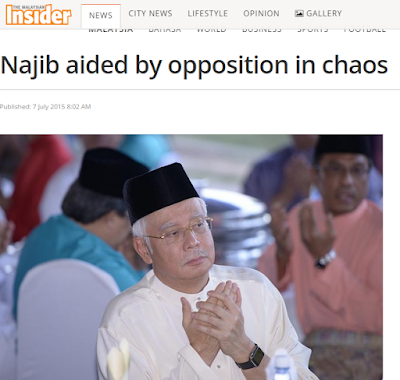 PM Najib thanks Pakatan for killing themselves

Incidentally, The Malaysian Inciter today pretty much suggested that the opposition's tendency to self-destruct has helped Najib stay in power and likely continue to help him stay in power in GE14.

Therefore, the games have only started.

At the moment, PM Najib does not seem to be in any immediate danger of being removed at all.
at July 08, 2015