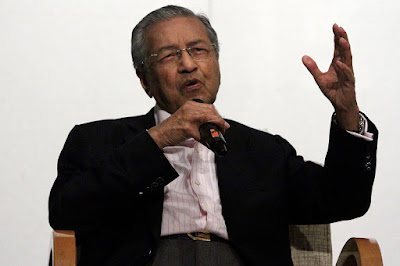 Raja Mudaliar or sometimes spelt Raja Mendeliar was the richest trader in Malacca during the early 16th century CE. He belonged to the Chitty community.

According to Sejarah Melayu, Raja Mudaliar was the Syahbandar (Chief of Port) of Malacca. He was portrayed as a treacherous person who was responsible for concocting false accusation to sow distrust between Sultan Mahmud Shah and his Bendahara Tun Mutahir, resulting in the execution of Tun Mutahir and his whole family. As a result, the Sultan was antagonized and the palace split into factions, this disunity made Malacca vulnerable to the invading Portuguese.

In recent months, various allegations – all unsubstantiated, and many simply outrageous – have been directed against me and my family.

These attacks began when I refused to implement Tun Mahathir’s personal demands. I refused, because I do not believe it is right for Malaysia to be ruled by proxy.

Tun then created a crisis when he recklessly claimed that RM42 billion was missing from 1MDB, when in fact these are audited debts backed by RM51 billion audited assets.

The latest allegation is that I have taken state-linked funds for personal gain. I believe Tun, working hand in glove with foreign nationals, including the now discredited political attack blog Sarawak Report, is behind this latest lie.

Let me be very clear: I have never taken funds for personal gain as alleged by my political opponents – whether from 1MDB, SRC International or other entities, as these companies have confirmed.

It is now clear that false allegations such as these are part of a concerted campaign of political sabotage to topple a democratically elected Prime Minister.

At no point have those making these allegations offered any evidence. All we have heard is that these allegations are based on leaked documents and unnamed investigators. Not once has the source of these documents ever been shown, neither have the documents themselves been provided for verification by lawful authorities.

As we now know, a number of the documents on which recent allegations have been based were reportedly doctored. The person who was leaking these documents is under investigation by authorities overseas for attempting to extort and blackmail his former employer. This says a lot about the reliability of the documents, and those who are using them to damage our government and our country.

Those who continue to mount these attacks should be prepared to face the consequences of their actions. These gutter tactics - in some cases criminal tactics - to overthrow the government will fail. Where appropriate, they will be met with the full force of the law.

It’s a shame that these false attacks motivated by self interest come at a time of unique opportunity for Malaysia – with our Chairmanship of ASEAN this year, and the prize of developed nation status around the corner. I will stay focused on the work of nation building for the people.
at July 04, 2015