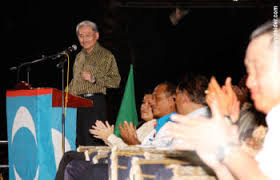 Umno, being the largest political party in the country which has ruled over the last 50 years, has poisoned the minds of the Malays, feeding them lies that their position is under threat from the non-Malays, former health minister and MCA vice-president Chua Jui Meng said.

"The problem is not the other races but Umno itself. This message is important for all Malays in Malaysia. They must be aware of the truth. We have to break their mindset,” he said in an exclusive interview with FMT recently.

He was quick to add that the Malays in urban areas were realising the truth of Umno's political game plan. However, he said, the Malays in the outskirts, such as in his home state of Johor, still had the orthodox mentality that Umno was Malay and Malay is Umno.

“This kind of propaganda poisons the minds of the Malays," said the 67-year-old lawyer-turned- politician.

He added that access to the new media as well as a paradign shift in the mindset of the urban Malays would enable them to break away from the Umno mentality.

He stressed that Pakatan Rakyat should aspire to bring about the change in the mindset of rural Malays in order to see a change in the country.

"I have told (Opposition leader) Anwar (Ibrahim) that I am a Chinese leader in Pakatan wanting to help poor Malays. My heart goes out to them... we need to help these Malays.

“In Johor, there is a huge information gap. We have to narrow this gap. After 50 years in power, Umno is still spreading lies to the people through the mainstream media which is under Umno control,” he said.

Chua, however, said that Pakatan should not be only concentrating on uplifting the Malay community's economic status.

"We tend to forget other races. Like the Indians, they too have problems. Even when they are citizens of this country, their rights are denied. This is the way of Umno," said Chua, who was in MCA for 35 years before deciding to join PKR late last year.

Asked on his plans for Johor as the new state PKR chief, he said he was not a novice in politics and knows the ways of the BN from a political perspective, which uses the mainstream media to win votes.

He said since joining the opposition front, he had become more open to the alternative media.

He said on the part of the Chinese, the community had repented and now had an open mindset knowing that they could live in this country without being dependent on Umno.

"The Chinese community works hard and are smart. Their priority is education... although they only receive minimal assistance from Umno, they don't give up. When they are educated, they can be critical and analytical in the way they think," said the veteran politician.

He also revealed that there was no racial issue in Malaysia, although Umno insists on racialising each and every issue that crops up.

"The Malays are blinded by Umno. Look at the education system. It does not allow our students to be independent and become critical of things. We still have laws to control university students... all these are meant to control the mindset of the Malays.

He also slammed Umno for using Islam to further their political agenda despite indulging in immoral activities like corruption.

“This message should be sent to the Malays in rural areas: the rich in the country are not the Chinese but those in Umno and their cronies.”