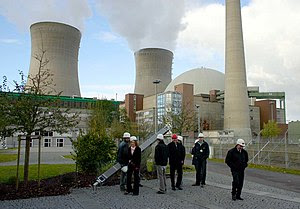 A nuclear power plant at Grafenrheinfeld, Germany. All German nuclear plants were scheduled to be shut down by 2020, but the decision was reversed in early 2010.


Nuclear energy policy is a national and international policy concerning some or all aspects of nuclear energy, such as mining for nuclear fuel, extraction and processing of nuclear fuel from the ore, generating electricity by nuclear power, enriching and storing spent nuclear fuel and nuclear fuel reprocessing.
Nuclear energy policies often include the regulation of energy use and standards relating to the nuclear fuel cycle. Other measures include efficiency standards, safety regulations, emission standards, fiscal policies, and legislation on energy trading, transport of nuclear waste and contaminated materials, and their storage. Governments might subsidize nuclear energy and arrange international treaties and trade agreements about the import and export of nuclear technology, electricity, nuclear waste, anduranium.
Since nuclear energy and nuclear weapons technologies are closely related, military aspirations can act as a factor in energy policy decisions. The fear of nuclear proliferation influences some international nuclear energy policies.
After 1986's Chernobyl disaster, public fear of nuclear power led to a virtual halt in reactor construction, and several countries decided to phase out nuclear power altogether. However, increasing energy demand is beginning to require new sources of electric power, and rising fossil fuel prices coupled with new concerns about reducing greenhouse gas emissions  have sparked heightened interest in nuclear power and predictions of a nuclear renaissance (made possible in part by major improvements in nuclear reactor safety).
As of 2007, 31 countries operated nuclear power plants. Nuclear power tends to be found in nations connected to the largest electrical grids, and so the largest nations (or groups of them) such as China, India, the US, Russia and the European nations all utilize it. The largest producer of nuclear capacity was the USA with 28% of worldwide capacity, followed by France (18%) and Japan (12%). In 2007, there were 439 operating nuclear generating units throughout the world, with a total capacity of about 351 gigawatts.
According to the IAEA, as of September, 2008, nuclear power is projected to remain at a 12.4% to 14.4% share of the world's electricity production through 2030.
Nuclear accidents and radioactive waste disposal are major concerns. Other concerns include nuclear proliferation, the high cost of nuclear power plants, and nuclear terrorism.
For some countries, nuclear power affords energy independence. In the words of the French, "We have no coal, we have no oil, we have no gas, we have no choice."Therefore, the discussion of a future for nuclear energy is intertwined with a discussion of energy security and the use of energy mix, including renewable energy development.
Nuclear power has been relatively unaffected by embargoes, and uranium is mined in "reliable" countries, including Australia and Canada.
A nuclear power controversy has surrounded the deployment and use of nuclear fission reactors to generate electricity from nuclear fuel for civilian purposes. The controversy peaked during the 1970s and 1980s, when it "reached an intensity unprecedented in the history of technology controversies", in some countries. In the 1980s, a popular movement against nuclear power gained strength in the Western world, based on fears of latent radiation and of a possible nuclear accident.
However, a growing number of policymakers have returned to the 'nuclear option' because it is perceived as potentially able to address dwindling global oil reserves and global warming with less greenhouse gas emissions than fossil fuel.
The parliamentary decision in 2002 in Finland to grant a license for the construction of a fifth nuclear power station was seen as very significant in that it was the first such decision to build a new nuclear power plant in Western Europe for more than a decade. After the Finnish decision several other countries announced their intention to consider construction of new nuclear reactors. Since that time, both the United Kingdom and Italy have announced pro-nuclear policies.
Some countries, such as Australia and Ireland, remain opposed to the use of nuclear power.
Though projections show growth in nuclear power, longstanding challenges lead to significant uncertainty in that projected growth. Among those challenges are continuing opposition to nuclear power, uncertainty about the management of spent fuel, and high capital costs compared with other energy sources. New reactors under construction in Finland and France, which were meant to lead a nuclear renaissance, have been delayed and are running over-budget.
Argentina, Armenia, Brazil, Bulgaria, Canada, China, Czech Republic, Egypt, Finland, France, Hungary, Italy,India, Indonesia, Iran, Israel, Japan, Lithuania, Mexico, North Korea, Romania, Russia, Pakistan, Poland,Slovakia, Slovenia, South Africa, South Korea, Sweden, Switzerland, Taiwan, Ukraine, United States, United Kingdom, and Vietnam are currently building new nuclear reactors or considering building new ones. Germany,Netherlands, and Spain have nuclear reactors but no plans for either expansion or accelerated closure of existing ones. Belgium is the only country in the world with an active nuclear phase-out law. Austria,Denmark, Greece, Ireland, Portugal and Norway have no nuclear power plants and have legally restricted the possibility of building a nuclear power plant on their territory to varying extents.
at October 28, 2010