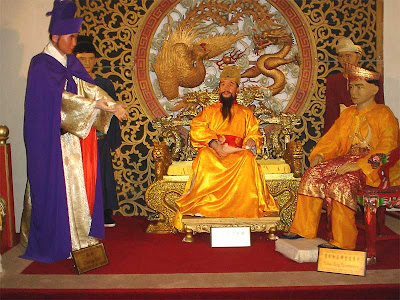 I find myself in a strangely odd position – an Indian speaking up for the Chinese. It has recently been asked of them: “What more do the Chinese want?”

If it were merely rhetorical, I will defend the right to ask questions of such a nature in the name of free speech and healthy discourse. Unfortunately it is not a question. It is a blatant threat. The politicians behind the threat have clearly identified themselves. They have also now shown their hand. They are shamelessly indulging in the gutter politics of communalism.

A demonstration 10,000-stronghad been planned for May 13 in Terengganu. We should reject this threat for the same reason we reject a bribe. Racial politics and corruption are slowly and surely destroying the very fabric of nationhood. A country that was put together carefully with effort, toil and sacrifice deserves better.

We must therefore entirely reject the threat and answer the question only in its rhetorical form: What more do the Chinese want?

Since 1969, the Chinese have seen the New Economic Policy (NEP) at work and not at work. But for all its faults, the NEP has distributed great wealth and provided unheard of opportunities to create a Malay middle class and super-rich elite of Umnoputras.

It has also allayed the fears of the Malay man-in-the-street that he/she will be ‘lost in the world’ (Tak akan Melayu hilang di dunia).

The Chinese with much public grace and equally much private grumbling have largely accepted the pain of economic restructuring. They still account for easily 80% of the income tax revenue of the country. But in this same period, true to their kind, they have girded their loins and redoubled their efforts.

Ever so quick to seize new opportunities, they have continued to prosper in spite of the excesses of the NEP. Surely there is nothing in this world and no religious or secular law that prevents a man or woman from prospering economically through the sweat of his brow or the straining of his sinews or the mental acuity of his business dealings.

We may not like the Chinese trait of applying themselves diligently to the task at hand and to the exclusion of all others; or their fiercely competitive nature; their kiasu-ness; their calculative frugality; their risk-taking; their business shrewdness; their culinary indulgences and their relentless pursuit of investments, returns and wealth in all its myriad forms.

But remember, they too may not like our traits of indifference, impracticalness, lebih kurang-ism … the list both ways is endless.

But we must respect them for their singular ability to create new wealth and not be merely consumers of old wealth. We must respect them for their resourcefulness and for their incredible pertinacity in the face of adversity. We must compliment them their innate understanding of the importance of personal savings in the economic life of an individual and of the investment opportunities that arise out of deferred gratification. We must thank them for showing us in practical terms what self-reliance and self-sacrifice really means.

Planning for the future

Surely, they more than anyone else have shown that the secret of capitalism lies in its unsurpassed ability to promote capital formation that fuels ever more new ventures and so ad infinitum.

They have shown us also that wealth has a generational purpose and that it is linked to a vision of the future we have for ourselves, our families, our society and the country we live in.

To me they are the least nihilistic of people. There is much we have learnt from the Chinese economic model based on hard work, perseverance and skills development. True, the pursuit of wealth and economic success is often accompanied by greed and avarice. Which race in the world is free from such follies and frailties?

But No! All this is not ‘what more the Chinese want’. It’s more, much more than that!

I have every reason to believe that the Chinese, who so often go about their tasks with one eye on the future, have come to the inevitable conclusion that if left unchecked, the politicians of this country will be the ruin of us all.

The Chinese are not Neros to helplessly fiddle while Rome burns.

‘What more the Chinese want’ is for the rot to stop.

They can clearly see with eyes teared by 5,000 years of the painful tide of relentless history. A history filled with upheavals, turmoil and revolution has given them an inbuilt ‘antenna’ that warns them when a society is approaching decay, decline and disaster.

They know that a rotten tree will not bear good fruits for long. They know there will be nothing left to share with or without the NEP and its sketchy successor, the NEM.

They know that zero, simply put, is indivisible.

The Chinese have sounded the alarm bell for all of us. What more do we want from them?